In August 2022, two centres of the University of Macau (UM), namely the Centre for Chinese History and Culture (CCHC), and the Chinese-Portuguese Bilingual Teaching and Training Centre (CPC), have published the fourth book of the Chinese History and Culture Comic Book Series, named “Shennong Tasting Hundreds of Herbs”. The series of books illustrate the traditional Chinese myths, legends, and historical stories. 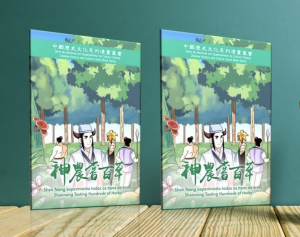 “Shennong Tasting Hundreds of Herbs” illustrates the story of the chief of the Yan tribe. Shennong was concerned about the suffering and hardships experienced by his people, particularly those related to famine and disease that were devastating to his tribe. He spent years roaming the mountains, tasting hundreds of herbs, and defining the curative properties of each one. It was based on these travels and experiences that he wrote the book named “Shennong Ben Cao Jing” (also known as “Classic of the Materia Medica”). However, he ended up sacrificing himself when he inadvertently tried the “Poison Hemlock”, a highly poisonous plant. To commemorate his virtues and merits, people honored him as the God of Chinese Medicine and built a Shennong Temple. This inspiring story is emblematic of Shennong’s indomitable and selfless spirit, for which he has been revered as a true hero by subsequent generations.

Similar to the previously published books, “Chang’e Flying to the Moon”, “Nu Wa Mending the Sky”, and “Jing Wei Filling the Sea”, this book was written in three languages including Chinese, Portuguese and English.

Both centres are part of the Macao Base for Primary and Secondary Education in Humanities and Social Sciences. The Chinese History and Culture Comic Book Series are in turn aimed to enhance young people’s awareness and understanding of Chinese history and culture in Macao and the international community. The launching of this book series seeks to promote the development of humanities and social sciences education in Macao and to nurture young talent through a series of teaching and training programmes, fostering the dissemination and influence of Chinese history and culture in Portuguese-speaking countries and regions.